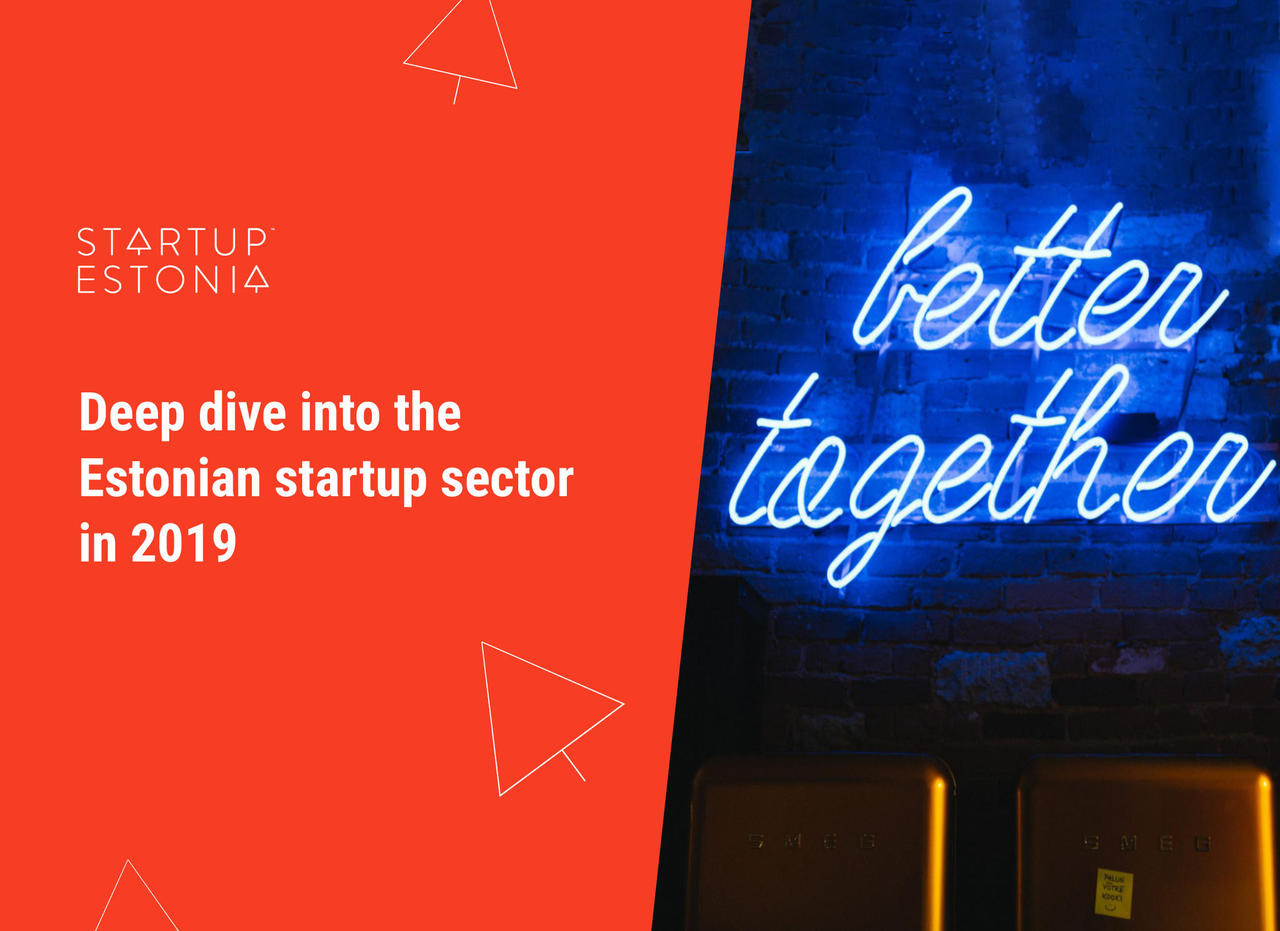 Deep dive into the Estonian startup sector in 2019

Another half a year, full of exciting events, hard work and interesting developments, has passed. While heat waves were hitting many locations around the world, we dived deep into the Estonian startup ecosystem and discovered some unseen pieces of information that we are now able to share with you.

General data about the startup sector

This year the Startup Estonia team has put a lot of effort into updating and systemizing the startup dataset of Estonia. There are currently around 650 startups in Estonia that we have counted. Most of them operate in the following sectors: Business software, services & HR (108 startups), AdTech & Creative Tech (98 startups), FinTech (69 startups), HealthTech, Life sciences & Wellness (58 startups) and CleanTech (48 startups). During the first half of 2019, 35 new startups were established, lead by CyberTech with 10 new startups created this year. One of these startups is a global fake news disruption service FakesKiller. Originally from Ukraine, FakesKiller just completed Startup Wise Guys accelerators  defense AI and cybersecurity-focused program CyberNorth. Dmytro Potekhin, Founder and CEO of FakesKiller: “We got everything we needed in Estonia - upgraded, incorporated and funded. We met great investors, mentors and friends - what can be better? Every startupper and investor dreaming of Silicon Valley better go to Tallinn first. There are more opportunities in Estonia and the startup environment is better. Tallinn is the best place on Earth to fail, succeed and start growing. This is the way to get your Silicon Valley dream come true."

For more insights, check out the statistical overviews of our startup sectors.

The 2019 statistics from the Estonian Tax and Customs Board show that at the end of the second quarter Estonian startups employ 4848 people locally. A year ago, at the end of June 2018, the employee number was 3369. This shows a yearly growth of +44%! However, if we look at employees who have worked in our startups during the last six months for at least one day, the number is even more astonishing. According to Statistics Estonia 7421 people have worked for Estonian startups during this period.  And to compare this with all the people in Estonia who worked at least one day during that period (695 700), we see that every 93rd person in Estonia has been somehow involved with startups. In addition, Estonian Startups Leaders Club has estimated that 1/3 of the people working in Estonian startups (2635) are based in their offices abroad. This also takes into account the people who are working in companies which don't classify as startups by definition anymore, meaning they have either been acquired or are older than 10 years.

The top 20 startups in Estonia account for 61% of the new jobs created in the first half of 2019. Top recruiters among Estonian startups have been Veriff (+204), Transferwise (+108), Bolt (+75) and Pipedrive (+41). For the first time, we had a closer look at the demographics of startup employees in Estonia. We found that 46% of startup employees are women and 54% are men. As expected, they are relatively young: 49% are between 21-30 years old and 29% are between 31-40. Almost half of the employees, 47%, have higher education and 35% of employees have general education or vocational education based on secondary education.

European tech startups are highly dependent on talent which has migrated to work at companies outside their home countries. According to Atomico VC report as much as 28% of founders and employees of private European tech startups are working outside of their home countries. In Estonia approximately 18% of startup employees have foreign citizenship (5% have EU citizenship and 13% have non-EU citizenship), 77% have Estonian citizenship and there is also 5% whom citizenship we couldn't confirm. The top 3 countries for startup employees with EU citizenship are UK, Latvia and Italy and top 3 countries for employees with non-EU citizenship are Russia, Ukraine and Nigeria. The amount of people working in Estonian startups from Nigeria can seem unexpected but when we look at the number of students from Nigeria, it makes sense (With Study in Estonia programme, foreign students are allowed to work while studying). Eero Loonurm, Head of International Marketing for Archimedes Foundation comments: ‘’There were 269 students in around 50 different curriculums from Nigeria in 2018/2019 studying in our universities. The most popular ones are curriculums connected with entrepreneurship, software development and other technical fields. Nigerians are mostly studying in Masters programmes but also in professional higher education programmes.’’ It’s also interesting to see that 34% of foreign employees are women while 63% are men and 68% of them have Bachelor's or Master's degree.

If we look at the same distribution among founders it turned out that like other countries, women are still heavily underrepresented in the startup world. The proportion of female startup founders in Estonia is currently around 15%. According to Female Founders Monitor 2019, this proportion is similar in Germany (15%), Silicon Valley (16%), London (15%) and Singapore (12%).  According to the EU startup monitor 2018, the average founder is male (82.8%), has a university degree (84.8%) and is approximately 38 years old. Interestingly enough, the average age of founders in Estonia is currently 37 years old and the majority of them are aged between 25-40. Most of the founders (59%) in Estonia have higher education. Most of the startup founders have Estonian citizenship (82%) and around 18% of startup founders are foreigners.

Maarika Truu, the Head of Startup Estonia comments: “Diversity is an important underlying pillar for a vibrant and sustainable startup ecosystem. And by diversity, we don’t only look at gender equality but diversity in terms of socio-economic background, culture and religion, but also education levels. I’m glad to see that after looking into the Estonian startup ecosystem demographics we can see that Estonia is comparable to other startup ecosystems in the world - that said, we also see that there is a lot of work to be done to improve. For example, we need to focus not only for the diversity in the founders network but also in the talent employed and investors”.

Moonika Mällo, the Startup Sector Monitoring Project Manager in Startup Estonia observes: “Although the average monthly gross salaries in the startup sector are significantly higher than the Estonian average, it still remains slightly below the average salary paid in the top 3 economic activities. According to Statistics Estonia, the average monthly gross salary in the first quarter of 2019 was highest in financial and insurance (2411 EUR), energy (2264 EUR) and information and communication (2195 EUR). At the same time, it is interesting to note that while the national salary top is led by financial and insurance activities, we see that among different startup sectors the biggest average monthly salaries are paid in gaming, transportation & logistics and deeptech & spacetech.”

In the first half of 2019, Estonian startups generated 155M EUR in turnover, which is an increase of 3% compared to the same time in 2018. It is important to keep in mind that we can only capture the revenue data of current Estonian startups and the actual figures of startups with Estonian origin will be even higher. Among startup sectors the biggest turnover belongs to Business software, services & HR (46,4M EUR), FinTech (20,9M EUR), CleanTech (14,7M EUR), Gaming (12,6M EUR) and AdTech & Creative Tech (12,3M EUR). Comparing the startups, the biggest turnovers were generated by Pipedrive (22M EUR), Comodule (11,9M EUR), Creative Mobile (11M EUR), Fiizy (8,6M EUR) and Starship Technologies (7,5M EUR).

Investments (based on the crowdsourced database)

During the first half of 2019, 117M EUR has been invested into Estonian startups. In total, there have been 24 new investment deals, with an average deal size of 4,43M EUR. Despite the investment sizes being smaller than at the same time in previous year, there has been a rise in the number of deals being made (15 investment deals made with the first 6 months of 2018).

Just this week the European Investment Fund and three Baltic promotional institutions: KredEx (Estonia), Altum (Latvia) and Invega (Lithuania), announced the signing of the Baltic Innovation Fund 2. The new fund will invest in private equity and venture capital funds that focus on the Baltic States, with the goal of further developing equity investments into small and medium-sized enterprises, to boost growth in the region.

So there you go - 2019 is another year of high growth for our startup ecosystem - the number of startups, employees & employment taxes paid is growing rapidly. We are happy to contribute to that growth with our activities, such as the Startup Visa programme. Startup Estonia's team is looking forward to the busy autumn of supporting our community & cool startup events. Btw - have you already submitted your event idea to Startup Week Tallinn 2019?