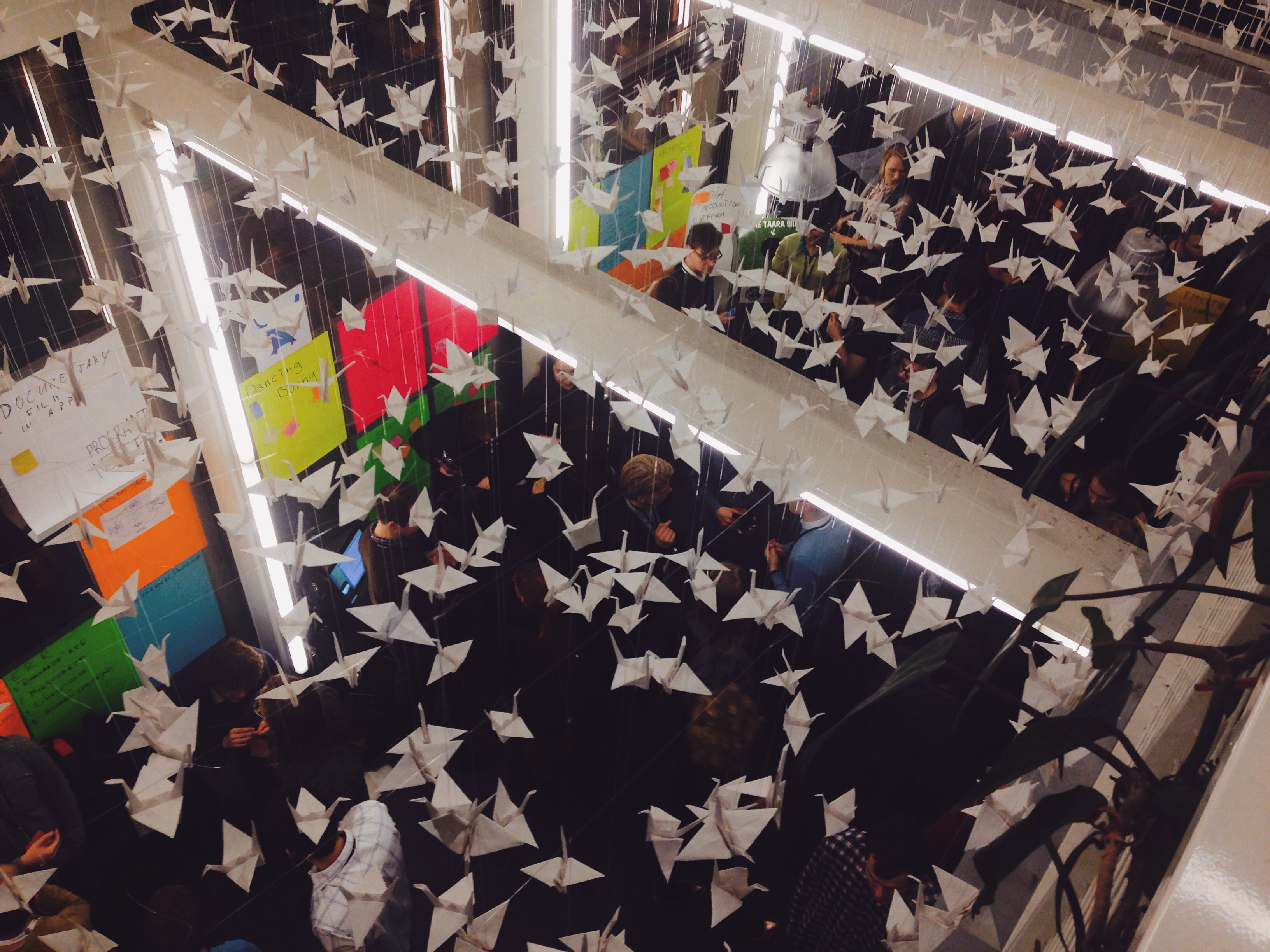 Not this time at least because we were there to find out what's it like to participate in a creative hackathon.

What happens when IT meets the creative sector? As it turned out, some wonderful solutions for filmmakers, film producers, fans of cartoons, teachers, people who would like to hide themselves from CIA, people who are interested in history or vice versa, people who want to use the latest technology and experience the world of virtual reality – one does not exclude the other though. It’s fair to say that both sectors, the IT and creative industry benefited from this event!

But let’s start from the beginning! On Friday afternoon about 100 people headed to Baltic Film and Media School where the very first Loomehäkk creative hackathon was held. People were excited, talkative and full of energy even before they were handed a cold Red Bull and a name tag with their speciality. After a brief introduction it was time to pitch the ideas or problems that needed to be solved. There were some confident pitchers, some semi-confident ideas and a lot of video pitches from organisations like Estonian National Museum, Tallinn Black Nights Film Festival (PÖFF), Estonian Public Broadcasting and A-Film Estonia.

When the last idea was pitched, it was hard to remember the first 10 ideas. Everyone who pitched got a poster and a pen to write down the name of the idea and to hang up the poster and wait for the dream team to arrive and state their plan for joining the team with a post-it note!

A tiny corridor was packed with posters and people eager to find the right team! The most wanted people were of course the programmers and developers, followed by UX/UI designers. After some struggle, it was clear that not all the ideas will have a team to create something, so finally there were 13 teams ready to hack. Unfortunately, the video pitches were not that engaging so most of the problems that Estonian National Museum or PÖFF had were not solved. It might be because of the pitches being very general or a bit vague or because there was no project or idea manager to ask for more information about the problem.

When the teams were formed, Mihkel Virkus from Brand Manual, who was also one of the mentors, inspired hackers with some use cases and great advice to keep in mind before starting to make a product or service. After the boost for the brainpower, a proper meal was served and then it was time to find a room for teams and well, hack! A lot of new information needed to be sorted through to continue with work and it seemed that many teams were realistic and started with smart planning and digesting the idea.

It’s time to get hands dirty!

Saturday was probably the most productive day (and night) for most of the teams who had figured out what to do exactly and how to do it! From early in the morning till late hours at night – workmode was full on accompanied with questions and feedback from mentors. There were about 20 mentors from partner organisations like Microsoft Estonia, Mooncascade, Fondia, Telia, Brand Manual, CreativeMobile, ERR, GameFounders, ERM, Estonian Film Institute, MusicEstonia, University of Tallinn, Europeana, Media Evolution etc. There were mentors who were very passionate about providing help and then some who might have needed some more instruction about their role and on how to help the teams. What did stand out though, was the friendly atmosphere at BFM, whether it was the lunch hour where mentors and teams were chatting and eating together like old friends or random questions at the corridors.

Tick tock the time is up!

The atmosphere did get a bit competitive when Sunday arrived because everybody remembered that this is still a competition and there could be only one winner! Deadline for submitting the work was 3 pm but to be honest, there were only few teams that managed to hand over their presentations in time.

Nevertheless, hackers were happy and tireless!

Which pitch did the trick?

When Saturday was the day when Kadri Ugand held a lecture about pitching, then Sunday was the time to use the theory in practice. 13 teams had picked their representatives and the pitching was on! Despite some technical difficulties and 3 minute time limit, there were no bigger mishaps. In addition to the main prize there were several prizes from Europeana with the total value of 25 000 euros. The sum was shared between teams called VR Quiz, Postcarding and Language of History. The special award for audiovisuals went to team Sipsik (Raggie) and top prize in the field of art was handed to VR Quiz. Teams themselves also had to pick their favourite and in this case, PRAP was the winner! The clear problem statement and confidence of the team leader Neveli Niit also brought them the victory of the whole event! The second place went to two men duo Kool – guys are trying to make the education system more functioning. The winner of the bronze medal was a team called Sipsik who managed to create a mockup of an app that should make reading more fun! NB! No programmers or developers were harmed during the creation of the mockup!

PRAP is a production assistant app that will put an end to messy riders, tech lists, call sheets and other piles of chaotic notes that is the necessary everyday (d)evil of all stage and film production related people. Neat and easy project management tailored for the specific needs of film and live stage productions, streamlined workflow rooted in live and instantly updated single sources of vital information - that is the PRAP! solution. Check their Facebook page to be up to date with their latest news.

Digix is the first start-up incubator for creative media companies in Estonia and the Baltic states. Digix Creative Hackathon was held for the first time but there are many more to come! You can find out more from here.