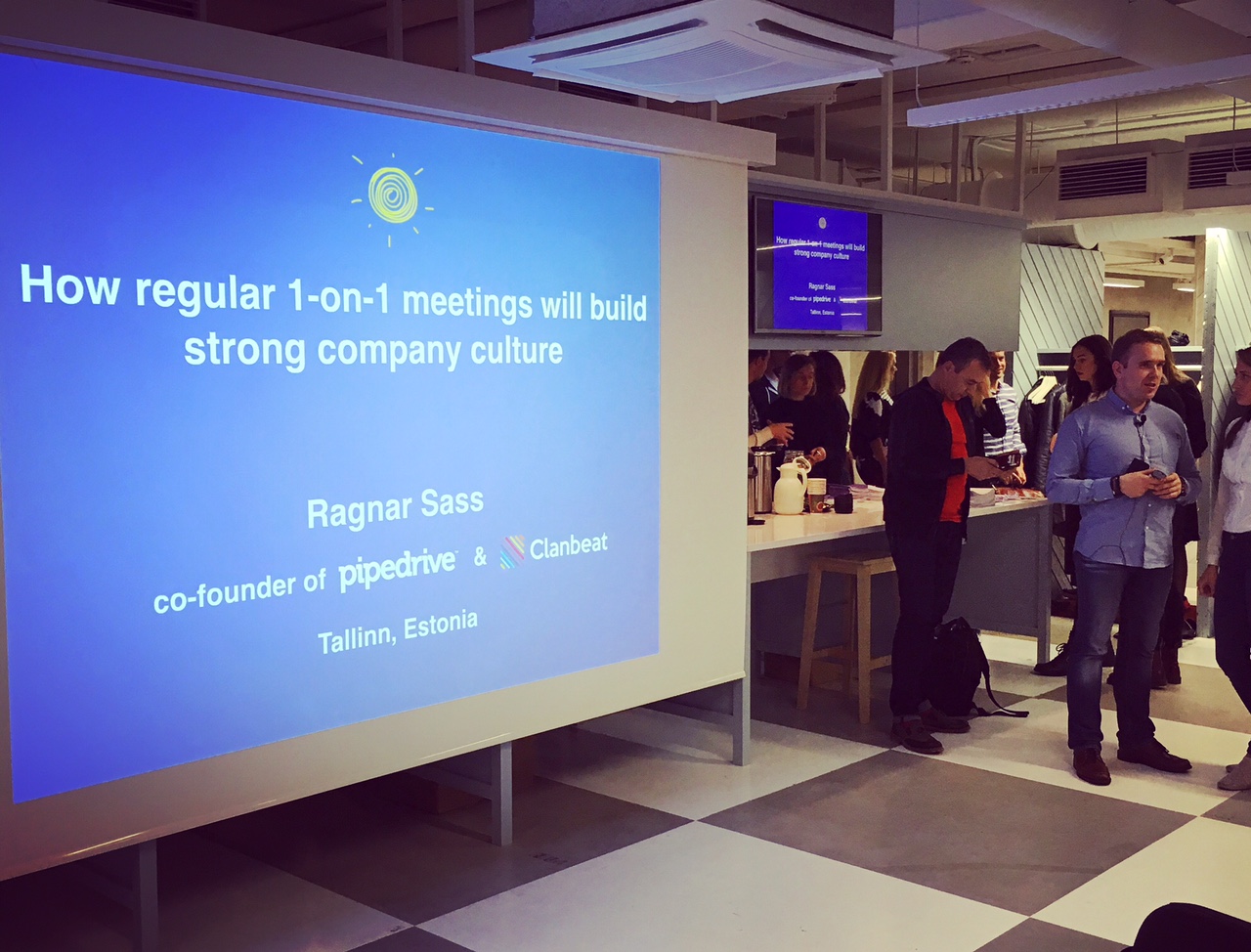 Startup culture meetup with Clanbeat - beat the drum for your clan!

Clanbeat is dedicated to improving the culture of companies as far and wide as possible. On the last Thursday of September the team behind this awesome HR tool organised their very first public (Estonian) meetup at Pipedrive to share tips and tricks on how to create an enjoyable workplace. The fact that all the seats were „sold out“ in less than a day shows that people are more than interested and curious about the topic!

Annual performance reviews are officially dead. A fast developing environment, such as a startup, requires feedback to happen often to effectively solve and foresee rising problems. Another issue with the annual reviews is that they tend to be too heavy, creating stress rather than building the grounds for a mutual trusting relationship between the employer and employee.

Every employee wants to feel valued and that their contribution really matters. That is especially true with the millennials who are more than happy to move countries for a challenging and rewarding job and don’t want or need to be locked down to a place. Tools like Teleport’s personalised super fast data comparison page make moving extra easy, so the playground for smart creatives is wider than ever and companies have to try their best to create a culture their employees would thrive in and want to stick to.

So how to create that kind of a culture? One of the best ways to achieve that like-minded synergistic environment is through regular 1-on-1s. The trick is to keep these discussions frequent (every 2-6 weeks), open and not just focus on the work-related things but to also cover the more general well-being as well as the long-term ambitions and aspirations of the employee. In the modern understanding, employees don’t work FOR the organisation but WITH the organisation. That means that the managers need to be as invested in helping their employees as these employees are dedicated to their company. It’s a two-way street.

Another tip for creating a great culture is to hire great culture fits in the first place. Ragnar Sass stressed that Pipedrive, for example, hires people not skills. TransferWise is even involving their existing employees in the recruitment interviews to get a second perspective on how good of a match the newcomer might be. It seems to be the global HR trend that every single employee is invaluable and recognised holistically as a real person, not just a set of skills.

One of the biggest challenges with the company culture is to keep it organically growing and developing while not losing focus. It’s easy for the core values of the culture to get diluted over time, especially if a rapid expanding process occurs. TransferWise made a point early on to define their culture with the help of their existing employees (who else would know it better) and catch the essence of it in slogans like „No drama, good karma!“ and „We get it done!“. The responsibility of implementing the culture lies first and foremost on the founders and managers who shouldn’t hesitate to set an example and be a positive role model.

Strong company culture isn’t something that can be created overnight but it can be worked towards with some conscious moves. So what is the first thing you can do to improve that culture? Small and informal things like drinking an occasional beer with your coworkers or having a meaningful chat 1-on-1 might not seem like much, but are the perfect first steps towards building an open work environment with happy and productive people.

All in all, here are the top tips for meaningful 1-on-1s take from the meetup:

If you missed out on the meetup and are curious to know more, here’s a LINK to the recording of the Clanbeat meetup at Pipedrive on 29th of September.