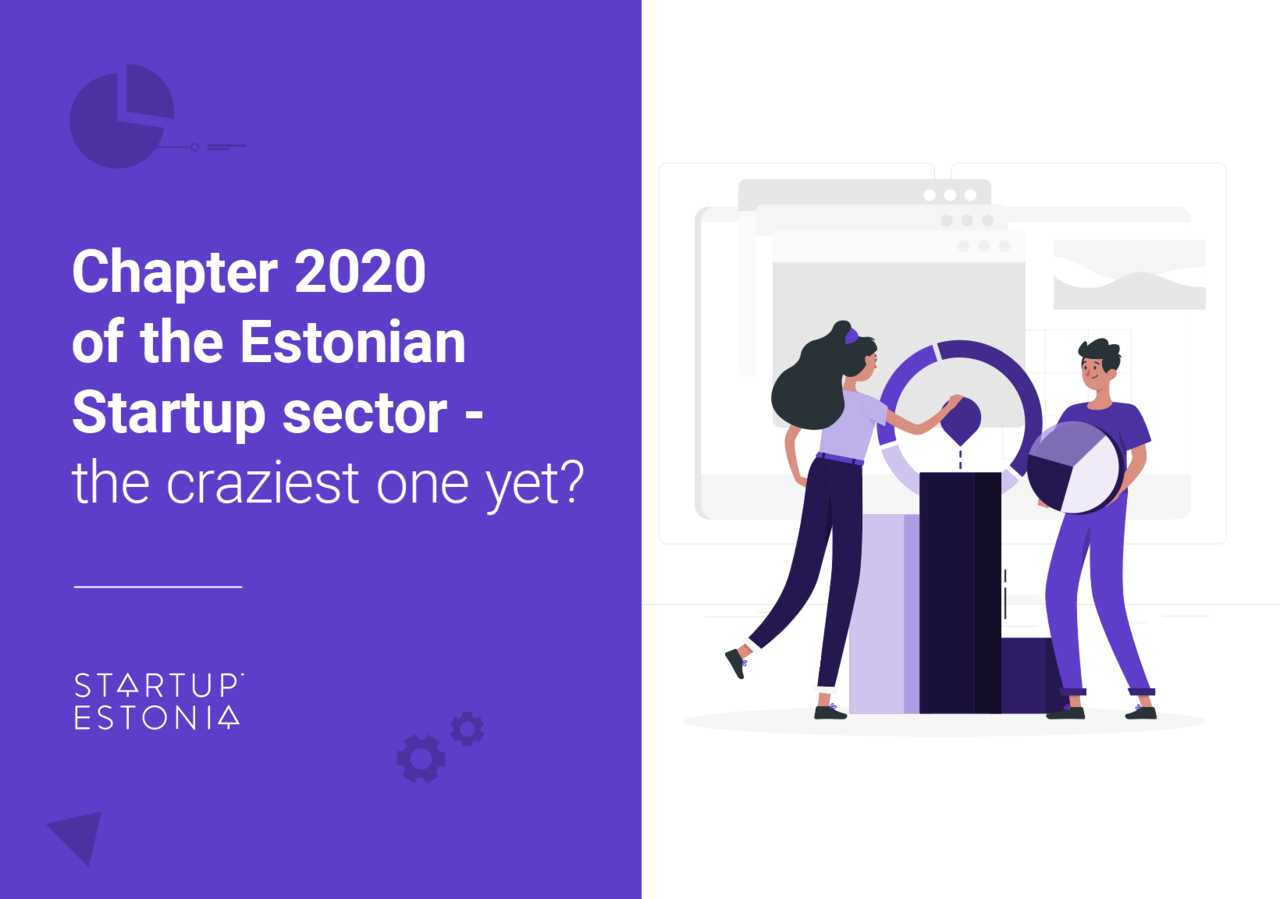 Chapter 2020 of the Estonian startup sector - the craziest one yet?

Quite a year, huh? If you were hoping for new challenges and excitement, you got it. Time for yourself and family? Check. Lot’s of pearly white snow in the winter? Now you can’t see the end of it. It was a time to think out of the box and find ways to adapt to the new reality. Let’s recap the year of hidden opportunities and find out how the Estonian startup sector did.

Let's start with the total number of startups in Estonia. As of today, the Estonian Startup Database is home to 1117 startups. In 2018 and 2019 respectively, 257 and 219 new startups were registered and although 2020 was a slower year for the sector, 113 new startups were still created last year. According to State of European Tech 2020 by Atomico, Estonia has 4.6x as many startups per capita as the European average - on a population-adjusted basis, Estonia is the capital of European startups!

People are the foundation of any economic sector. Luckily, the employment rate of the Estonian startup sector did not decrease despite the turbulent year. In fact, there was a yearly growth of 1,2%. According to Estonian Tax and Customs Board statistics, Estonian startups employed 6072 people locally at the end of the 2020. A year ago, that number was 5998. Unsurprisingly, the yearly growth was slower than last year’s 32%.

However, the main reason behind the slowdown is not COVID-19. Startups have also matured. Startup Estonia’s definition stipulates, that once a startup reaches 11 years of age, it is considered a matured company and no longer a startup. Additionally, we saw an impressive number of exits - 7. Those former startups are no longer reflected in the statistics. Have a look at the timeline of our matured startups and exits here.


Moonika Mällo, the Startup Sector Monitoring Manager at Startup Estonia comments: “Reported statistics are also affected by the basis of compiling the data. A company’s data is taken into account until it reaches maturity level or completes an exit, which is a sign of success and sustainability of the company. Last year we witnessed numerous exits and several startups reaching maturity. The sector’s employee count of 6072 does not reflect the 797 employees of exited or matured companies, although they would’ve been included at the beginning of the year. This is one of the reasons that the growth rate is smaller.“

Looking at the total number of employees who have worked in startups for at least one day, the number is significantly higher. According to Statistics Estonia, 8283 people worked for Estonian startups during 2020, meaning that every 89th person of Estonian working population was involved with startups!

The top recruiters list of 2020 is quite similar. Top 20 startups in Estonia account for a remarkable 52% of new jobs created in the sector in 2020. Bolt is leading with 185 new hires, followed by 52 and 36 respective recruitments of Paxful and Transferwise. Rounding out the top 5, Ampler Bikes hired 32 people and Comodule inked 28 employment contracts.

31% of the founders of Estonian startups are of foreign origin and the average age of a founder is 36 years old. The proportion of female startup founders has remained at around 15%, which is about the same as elsewhere in Europe. According to the Baltic Startup Scene 2019- 2020 report, 13% startups in Baltics, 18% in the Nordics and 15% in CEE countries are led by diverse teams, meaning that both genders are represented among the founding team. The Global Startup Ecosystem Report (GSER 2020) states that globally, 14,1% of startup founders are women.

Employment taxes paid by startups is an important indicator of the sector’s vitality and contribution to the economy. While startups’ employment tax sum was 53M EUR in 2018, it surged by 47% to 78M eur in 2019. Most recently, the yearly growth was 24% to 97M EUR in 2020. Although the total contribution increased, the impact of COVID-19 is still seen with noticeable dips in the second quarter, -15% compared to the previous quarter, and fourth quarter, where the decrease was -3%.

Eve Peeterson, Head of Startup Estonia comments: ‘’While the yearly employee count increase in the startup sector was only 4%, the amount of employment taxes paid increased by an impressive 24%. The resilience and adaptability of the sector proves to be of increasing value to our nation’s success, especially during economic distress.’’

Markus Villig, CEO and founder of Bolt comments: ‘’Our business was hit hard by the global crisis – during the heaviest lockdowns, the global volume of rides dropped by 85%. However, we were able to quickly pivot the product plans and shift our people between teams to accelerate food and grocery delivery launches and help people stay home during the pandemic. We expanded our food delivery service from 4 countries to 16 in 2020, we also launched grocery delivery on Bolt Food in a matter of days. As we saw people prefer scooters as a more private mode of transport during the health crisis, we accelerated our scooter plans in many cities, expanding the scooter service to 45 cities in Europe last year. Although Bolt has more than 50 million customers in 40 countries globally, our headquarters is located in Estonia. We are planning to continue our rapid growth this year, rolling out new markets and exciting products. To support the growth, we will hire hundreds of people in Estonia this year.’’

By far the largest investments of 2020 were raised by Bolt, who secured 250M EUR. That is followed by Monese’s 55,4M EUR, 41,3M EUR of the now matured Skeleton Technologies, Veriff with 14M EUR and RangeForce, whose round amounted to 13,6M EUR.

2020 also brought a record amount of exits to our ecosystem. Among the shooting stars, Pipedrive shone the brightest by reaching unicorn status! That means Pipedrive was 1 of just 18 new $1B+ tech companies born in Europe last year, according to the The State of European Tech 2020 report.

Timo Rein, co-founder and long-time CEO, Pipedrive comments: “Nearing year 10 of our company’s journey, we were looking for a future ownership structure that would help us invest long-term, provide alignment of vision, and bring necessary competence for the next decade of growth. Vista Equity’s track record matched what we were looking for, and in the light of their deep industry expertise and executive resources, a long-term partnership was kicked off. As a result, there’s a clear positive impact for Pipedrive and its long-time employees.

Firstly, we will continue on our path and manifest our vision even faster. Pipedrive customers will be able to achieve their revenue goals through an exceptional sales process and manage their whole customer journey end-to-end. Secondly, many of our early employees are already using some of their returned capital to invest in new startups, expanding and strengthening our local entrepreneurial community. We’re absolutely thrilled to see that!”

In short, the startup sector has tackled every hurdle head on. Seeing it succeed in putting up with what many consider the most difficult year ever should bring optimism to all. Startups are here to stay, they’re the real deal. Taxes paid by the sector has nearly quadrupled to 97M in 2020 from 2016's 28M, although it was already looked at as a booming industry back then. We at Startup Estonia will continue helping the stars shine and newcomers get their hands dirty. We are incredibly excited for that and would like to thank everyone for continuing to roll with us! Here's to many more great years.

The Q3 Results of The Cyber Technology Startups